This is a classic post from Machinima.com, which I originally posted around 2002! In it, I reference classic Machinima films - I’m talking about things like the Matrix 4x1 series.

I’ve been having a conversation about chat rooms, recently, and the reason that despite the fact that there’s all these fancy 3D chat rooms, they’ve never taken off. It seems odd- after all, they’ve got everything that traditional text-based chatrooms have, plus a real 3D environment. Yet, as I write, IRC is still the most popular form of Internet chat, with 3D chatrooms relegated to the position of novelty.

Why? Well, sure, it could be that they aren’t terribly convincing, or that the software’s difficult to set up, or that the models used look silly. But, frankly, it’s not. The reason why they haven’t taken off is simple, and it’s the same one (as you, gentle reader, spot my point come galloping over the hill like the proverbial US Cavalry) that’s doing a lot to hold back most Machinima from being considered as an immersive filmic form. Both of them are deliberately, even if they don’t know it, blocking lines of communication between character and watcher. 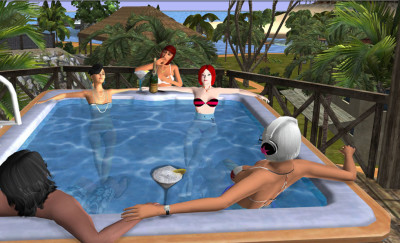 Text is one of our most enduring artistic forms, and from the point of author to user communicaton, it’s one of the most primitive. There’s a single vector across which information is communicated, that being the printed word: I write these words, and later on, you read them. You extract all the information, all the subtle nuances of the points I wish to make, from a simple string of letters. No inflection, no rise and fall of my voice, nothing. It’s why it’s so hard to get sarcasm across via email or USENET

(On a related note, there’s one form of communication more limited, at least, and that’s unpunctuated text. Punctuation is text’s sole inflection, and without it much textual communication breaks down. But I digress.)

A radio play, by contrast, has many more vectors for communicating its information. Sure, there are the words spoken by the characters in the play, but running parallel to that there are the manifold layers of meaning communicated by the tones of the actors, their accents (plummy Sloane for a snob, rough Cockney for a dodgy gangster, at their most obvious level), their inflections, and the background noise and music coming over with the play as a whole.

So, what happens, say, if you cut off some of those vectors? Does the play just revert back to the level of a book, which is still perfectly acceptable and interesting? Try it for yourself and see- run a couple of chapters of “Lord Of The Rings” through a speech synthesiser, for example. Still as interesting?

The brain is programmed to decode information from all the potential information vectors coming from any specific communication medium, you see, and when any specific vector doesn’t contain any information, that doesn’t mean that the brain stops decoding it. On the contrary, it will attempt to extract information from the vector even if the creator of the media didn’t intend it to- and what it extracts and feeds into the listener’s brain will rarely help the message the media is trying to get across. For example, in the “speech synthesiser” example, the information it will decode will include the knowledge that the speaker doesn’t have any care for what he is saying (and therefore the content isn’t very important), that there’s no inflection (which isn’t a human characteristic, which will unnerve the listener and make him uncomfortable) and so on.

So how does this affect Machinima, exactly? The same way it affects the chat rooms. There are myriad lines of communication more in a visual medium than in a radio play- body language, character expression, lighting, speed and nature of movement within the scene, to name just a few. Yet, in most cases, the lines of communication used will be, at best, the same lines used by the radio play: no body language (just a wobbling Quake character), no expressions (just the same skin), constant movement in any situation, or inappropriate movement- a whole bunch of misused vectors.

So, what do we have to do to get Machinima accepted by the massed public? Simple. We have to start communicating as they expect us to- with character body language, with changing expressions, with film language. Otherwise, it’s not surprising that the find our films alienating and confusing.

The vectors of communication we’re misusing are telling them to.